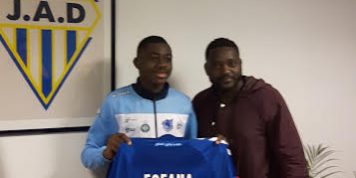 Youssouf FOFANA, player of U19 DH group of Himed HAMMA and his assistants Adlane BOUABACHE and Sébastien JOFFRE has just committed for the next 2 seasons in favor of the professional club of the club STRASBOURG, and thus joins Emannuel ZUNON his teammate under the drancéennes colors.

Trained at the ESPÉRANCE PARIS 19ème club from U6 to U14, Youssouf joined INF CLAIREFONTAINE during the 2012/2013 season.

After a season in U15 at RED STAR, Youssouf decided to join the youth teams of JA DRANCY in U16 under the orders of Nabil FEGHOULI during the 2014/2015 season.

DHR champion and finalist of the PARIS U17 cup with the 17 years DHR group of Saloum COULIBALY during the 2015/2016 season of which he was the captain, Youssouf realized a full season before joining the U19 DH group of Himed HAMMA during the 2016/2017 season.

Eternal worker and player with an irreproachable state of mind, Youssouf is reaping the benefits of his investment, his seriousness and his determination.

We send our sincerest congratulations to Youssouf and wish him all the best for the continuation of his training under the colors of Strasbourg.