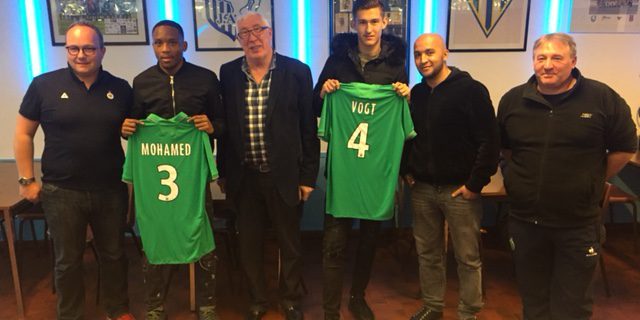 This Thursday, April 13, Quentin VOGT, central defender U19 DH group, and Fahad MOHAMED left side of the same group led by Himed HAMMA and his assistants Adlène BOUABBACHE and Sébastien JOFFRE have committed for the next 2 seasons in favor of our partner club. AS SAINT-ETIENNE, in the presence of the president of the JA DRANCY Alain MELAYE, Mr Ludovic PARADINAS, recruiter of the AS SAINT ETIENNE on the Paris region, as well as families of Quentin and Fahad.

Finalist of the PARIS U17 Cup and winner of the DHR 17-year-old championship during the previous season, Quentin is reaping the rewards of his enormous work and the irreproachable state of mind he has shown during his three seasons spent with JA DRANCY, and the FC AULNAY club where he played for 9 seasons before joining JA DRANCY.

Arrived in the course of the season from the training center of PARIS SAINT GERMAIN, Fahad was able to quickly rebound and find a new professional structure thanks to its performance during meetings of the weekend, but also benefited from the many tips provided by U19 DH staff educators.
He thus reaped the fruits of all the work done since his arrival at the club.

These signatures, which come after those of Youssouf FOFANA and Kipre ZUNON at RACING CLUB DE STARSBOURG, bring to 4 the number of U19 DH players who have committed this season to a professional club.

We send our congratulations to Quentin and Fahad, wishing them the best for the rest of their career under the colors of Saint-Etienne, as well as for their end of the season in the drancéennes colors.