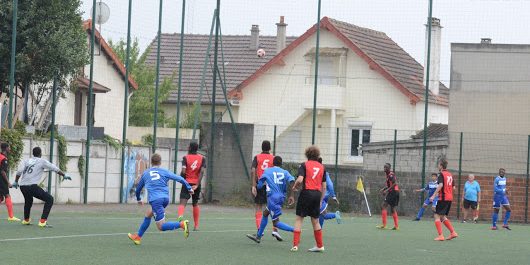 The CFA qualifies for the next round in the cup of FRANCE, as well as the senior CDM in cup of PARIS, the DH DH 19 years in cup GAMBARDELLA, the 19 years DHR and the 16 years Regional.
Victory of female seniors in the league,

Elimination in PARIS Cup for the reserve, defeat in the league for the 17 years national.

The 14 years Régional start the group phase of the PARIS Cup by a draw away.

The Drancéens will know the name of their future opponent in the next round after the draw that will take place on Tuesday at the premises of the equipment manufacturer NIKE.

Elimination for the reserve of Marc Julien and Ralph NONCENT 3 goals to 1 at FLEURY in PARIS section.

On behalf of the second day of the PH championship, the senior women of Lucien JOSEPH have largely won at home 4 goals to 1 against RC SAINT DENIS with a doubling of Irina, a goal from Rhamata and a goal from Coraline.

After 2 days of championship, the drancéennes occupy only the 1st place of the classification.

In Cup GAMBARDELLA, Himed HAMMA’s 19-year-old DH qualify for the next round with a 6-goal victory over goals from Mathieu FONTANG, Kipre ZUNON, Jérémie LIOKA LIMA, Steeven GUEGA and Khalil GANNOUN twice.

Oscar DE LA TORRE’s 19-year-old DHR and Sébastien COSTA will be present at the next round of the PARIS Cup after having set Champigny 3 goals to 2 goals for Mohamadou SOUARE, Youssouf FOFANA and Caliste DIMUENAY KAKESE.

On behalf of the 7th day of the championship, Flavien BINANT’s 17-year-old lost 2 goals to 1 (goal of Abdeljalil HACHEM) against HAVRE.

The 16 years Regional have imposed 6 goals to 1 on behalf of the round of framing of the PARIS Cup against VILLEJUIF with goals of Precious NKABA by 2 times, Walid ARRAHMANE, Marwan AOUADI, Abdoul DIABY TIBKOURA, and Paul LEVARAY.

Also on behalf of the PARIS Cup, the Regional 14 years of Bakary SYLLA and Julien VASSEUR returned from their trip to AUBERVILLIERS with the 2 points of the 1-1 draw of Alexis MANSION.

U16 A FEMININES (Plateau): 2 victories