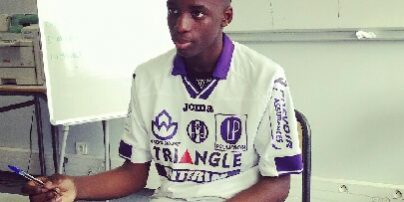 A player of the 17 years NATIONAL JA DRANCY is committed to the TOULOUSE FOOTBALL CLUB.
Indeed, this afternoon, Moussa DIARRA central defender born in 2000 playing with the group U17 NATIONAUX Flavien BINANT has committed for 2 seasons in favor of TOULOUSE FOOTBALL CLUB.
After having played in the 2014-2015 season with FC BOURGET’s U15 DHR, Moussa joined the ranks of JA DRANCY during the 2015-2016 season and quickly became part of the group and showcased his qualities. which brings to 4 the number of U17 NATIONAL players who signed in favor of a professional club this season after Billal MEHADJI (RENNES), Makan SIDIBE (LORIENT), Randy MAVINGA (LENS), and Moussa DIARRA (TOULOUSE).
Congratulations to Moussa, his educator Flavien BINANT, and the educators who contributed to the progress of these young players in his previous clubs.