Made in JAD épisode 11 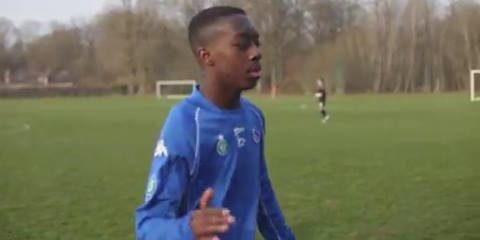 Made in JAD episode 11 with Glodi MAFUALA LUZEYIMO LEM midfielder offensive born in 1998.
Trained at the CMS Panini from beginners to U13, Glodi decided to join the U15 ESPERANCE PARIS 19th under the orders of the emblematic LOSSENY SY of the 2011 season -2012, in the 2012-2013 season.
JA DRANCY, the following season, he is a member of the JA DRANCY, and integrates during the 2013-2014 season the group 16 years of Saloum COULIBALY with which he won the title of champion of Paris Ile de France U16, and failed in The penalty shoot-out at the U16 Paris U16 Final Cup against ANTONY, and also participated in the 17-year-old DH team led by Marc JULIEN in the 17-year-old national championship.
For his second season at JA DRANCY, Glodi played in the 17-year-old national championship under the leadership of Flavien BINANT, and had a great season with his partners climbing to 4th place in this very strong championship.
Authors of beautiful performances under the colors, it attracted the covetousness of many professional clubs (VALENCIENNES, TROYES, REIMS), and decided to engage in the end of the season in favor of the STADIUM OF REIMS, within which he evolves with the 19 year old national groups.
We wish this young player “lipoutou” who will have marked his passage to the JA DRANCY by his discretion, his irreproachable attitude, his great state of mind and his relentless taste for work of continuation of his training at STADIUM OF REIMS , and in the pursuit of his school curriculum.