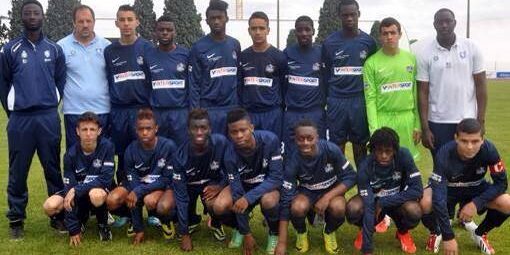 Since the beginning of this season 2015-2016, 3 clubs represent FRANCE in the essential YOUTH LEAGUE U19, namely LE PARIS SAINT GERMAIN, the OLYMPIQUE LYONNAIS and THE STADIUM OF REIMS.
YOUTH LEAGUE is a European competition held in parallel with the famous CHAMPIONS LEAGUE, and divided into 2 different competitions joining in the 2nd phase.
Indeed, a first competition under group phases groups U19 teams of professional clubs whose first team managed to qualify directly for CHAMPIONS LEAGUE at the end of the championship of FRANCE, or through the play-offs.
A second competition in the form of round-trip matches concerns the winners of the various European U19 national championships.
PARIS SAINT GERMAIN and OLYMPIQUE LYONNAIS are competing in the YOUTH LEAGUE for the U19 teams whose first team is competing in the LEAGUE CHAMPIONS, and the REIMS STADIUM (U19 champion in the title) is competing in the national champions competition.
Two young Drancéens born in 1998 who were part of Flavien BINANT’s U17 NATIONAUX group during the 2014-2015 season are playing the YOUTH LEAGUE this season: Abdel BENHALIMA HAJJEM with the REIMS STAGE, and Florian ANKOUE with the OLYMPIQUE LYONNAIS.
Abdel started on the substitutes’ bench on the match between the REIMS STADIUM and MIDDLESBROUGH, and took part in the last 25 minutes of the match with a nice entry and a final victory of the REIMS STADIUM 5-3 goals.
Florian, meanwhile, took part in the last half hour of the match between OLYMPIQUE LYONNAIS and FC VALENCE. Author of a goal during the first meeting of YOUTH LEAGUE against the GANTOISE, he has unfortunately seen his shot against FC VALENCE hit the goalpost of the Spanish team, which did not stop the young Lyon to win 1 to 0 against the young Spaniards.
We wish these 2 young players to go as far as possible in this competition and continue to show off the drancene colors across Europe.