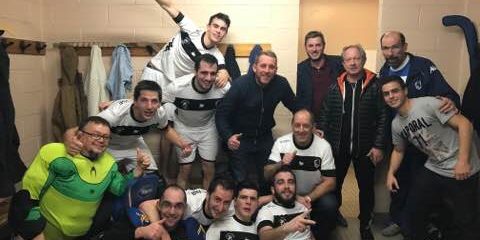 Saturday, November 5, 2016, around 22:00 … At 5 precise seconds of the end of the meeting; a goal, this goal so much sought after, so much wanted, this liberating goal that sends you into another sphere … But especially in the 1/8 Cup of France final!

Cup match therefore, always meets the particular scent … But this match began under the best auspices for the Drancéens with a goal scored from 24 seconds of play by Q. Darakdjian (1-0 / 0’24). Followed 50 seconds later by a skull shot from captain A. Guilbert (2-0 / 1’12) who reoffended immediately to register the doubled (3-0 / 1’28); The opposing team took a timeout which cut the good entry Drancy. In the 4th minute, with a nice shot in the skylight, Villejuif reduced the gap (3-1 / 4’00).

The debates were balanced during this first half, the game of the two teams was not so decisive until the fourth goal of the JAD by D. Pouget (4-1 / 11’43). Until the break the defenders and goalies took over the attack and the score remained there.

The second part started in the opposite direction of the first with a visitor goal after 3 minutes of play (4-2 / ​​28’17). Drancy could not develop his game, being oppressed by Villejuif who recolled to a unité on a defensive error (4-3 / 37’10). The tension went up, the faults became harder, which gave two Direct Coups in favor of the Drancéens, who did not concretize them. And it was the Villejuifoise team that came back and put the doubt in the drancéennes heads (4-4 / 40’28).

It remained 10 minutes to hold, 10 minutes to push, to score, to get out. This questioning that any coach asks himself to make the changes … But Drancy made the first mistake with his 10th team foul and therefore a Direct Coup-Franc for the visitors, stopped by the night guard C. Belliot.

There remained 3 minutes of play, the two teams played the against thoroughly, indulged on each ball. Then came that bullet that the goalkeeper pushed back once, but he could not prevent A’s victorious goal. Blanchard who took the ball and made the desire and the match of his entire team (5-4 / 49’55).

The JA Drancy therefore qualifies, and this is historic, for the 1 / 8th finals of the Coupe de France Rink-Hockey and face Saturday, December 10 a resident of the Elite, SA Mérignac.

Next game for the N2, it will be in the league on Saturday, November 12, with the reception of the Gleizé team. Match at 20:30. Come cheer on the players.